Along life’s journey God will sometimes bring us to a special place for a season. Such was the case at Connecting Point Church where my husband and I had previously served as worship leaders in 2013-2014. “To everything there is a season, a time for every purpose under heaven.” (Ecclesiastes 3:1) We knew we were overdue for a visit, and it felt wonderful to reconnect with the people here. And there was no shortage of smiles, handshakes and hugs.

The sanctuary hadn’t changed much other than the noticeable addition of chairs (and people). The music was led by husband and wife team Thomas and Liz Stefanini. They played a nice mix of new and old, including the Maranatha classic, “In His Time”. The chorus goes, “In his time, in his time. He makes all things beautiful in His time”. As we sang it, I looked around the room and thought about how God had made this music team “beautiful” and how He made every aspect of our lives beautiful, according to His purpose and plan. And now, in HIS time, God had led us back here, to a place we had called home, and to a people we have greatly missed.

Pastor John Westfall began his message by stating, “You WILL need your Bible today!”  Pastor John hadn’t lost his great sense of humor. While he can be funny, he is also quite a serious guy at times. On many occasions we have seen him shed tears as he preached his heart out. He is extremely passionate about leading people to Christ and gives an invitation at the close of every message. And he was the man God chose to baptize my niece Samantha and also my dad! Originally from North Carolina, Pastor John moved to Missouri in 2002 to attend Baptist Bible College.   In 2006, he, along with his wife and 2 daughters, stepped out in faith and moved to Upstate NY to plant Connecting Point Church.

Pastor John’s message today was on angels. As always, he provided a plethora of scriptural references to support his teaching. Angels are mentioned over 160 times in the New Testament. Angels have many characteristics – they appear in vast numbers (Rev. 5:1), some have fallen (demons), they are invisible (2 Kings 6:17), they are bright (Matthew 28:3). Some angles are God’s messengers. Some angels worship God continually without rest (Rev. 4:8). They are not human but can have a human-like appearance (Gen 19:2). Angels minister to believers and they will be God’s agents in the second coming and final judgement. They are even going to SOUND the TRUMPET!   And while angels are awesome, powerful beings, Jesus is superior to them. “An angel is a spiritual creature created by God without a body for the service of Christendom and the church.” ~ Martin Luther

At the close of his message, Pastor John gave an invitation to accept Jesus. He asked, “Do you believe Jesus is the ONLY way?” He explained that the prayer is not what saves you, but it marks the day you made a decision to receive Jesus. He then asked if anyone wanted to grow in Christ, and hands went up all over the room. As he prayed, I began to pray for him and for the entire congregation … “Dear Lord, we’ve missed Pastor John and the people at Connecting Point. Thank you for all You have done at CPC and for giving him Pastor John wisdom to lead the flock. I ask that You give everyone here clear direction for every season that lies ahead, in Jesus’ name, Amen”.

Sunday services are at 10:30 am, and that is preceded by a Bible Study at 9:15 am. Mid-week prayer group is held on Wednesdays at 6 pm and Bible study follows at 7 pm. They also have strong youth programs that run simultaneously to these. There is always a lot going on here, and the bulletin was overflowing with announcements of all the fantastic events that were coming up. My husband and I even signed up for their 8 week Marriage Class that will be held Wednesdays at 7 pm starting on April 4. CPC has a strong emphasis on missions and regularly support various missionaries and missions projects. They also have a 24/7 prayer line available at (518) 4PRAYER. From summer camp to youth trips, to special holiday events and fellowship meals, this really is a wonderful CONNECTING POINT for the Body of Christ. Visit their website or, better yet, CONNECT with them in person. And be sure to bring your Bible! 😊

After the service, we continued talking with so many we hadn’t seen in several years. It still is and always will be a home to us. That’s because our “connecting point” is not the building, but God and the hearts of the people. We are forever connected by the Holy Spirit.   I know that angels aren’t human and that we will never take the form of an angel. But as we pulled away, I felt as though we had just been sitting amongst a multitude of angels … the people of Connecting Point Church. And “In His Time” we will see them all again. 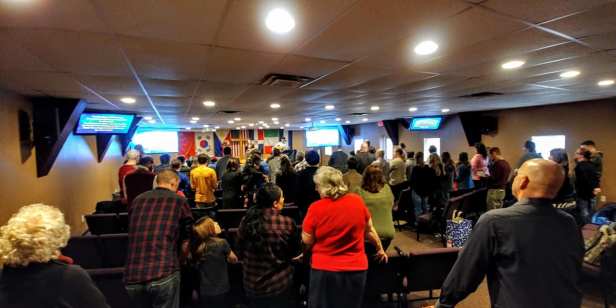