My good friend Loretta Rigney was at the door to greet me! She always spoke highly of Believers Church, and she was excited that I was finally there to catch a glimpse of it and meet her church family. The opening song was vibrant and prepared us to praise and shout. The people were excited to be there. You could sense something unusual in the atmosphere, indicating that we were in for something unforeseen and special.

And then it happened. A man in a wheelchair made his way up to the front. His testimony moved people to tears as he shared his recent near death experience. This man had been sick for the past 8 weeks and his prognosis was grim. He had been healed of a life threatening infection, and it was nothing short of a miracle that he was here with us. In tears of thanksgiving he proclaimed Psalm 118:17, “I will not die but live, and will proclaim what the Lord has done”. Just as I was about to ask one of my friends if they knew this man’s name, God spoke to me … “Donna, meet Pastor Wayne Elston”.

Pastor Wayne had e-mailed me only a couple days prior to tell me he looked forward to meeting me, stating that he was overcoming an illness, but he never let on about the extent of it. And here I was, meeting him for the very first time as he shared this powerful testimony of God’s amazing grace. I could have left right then and had enough “blog material”. Extra, extra … read all about it! God is working miracles at Believers Church!

Following the announcements, Pastor Wayne’s son, Jeff Elston made his way to the pulpit. You could sense the great love this man had for his father and his gratitude that his father was present to hear the words he prepared to speak. Hebrews 11:32 lists Gideon as a hero of faith. In the book of Judges, God was preparing Gideon for battle against the Midianites. God gave him clear instructions to decrease the size of his army, and it quickly shrunk from 32,000 men down to a mere 300 men. They were greatly outnumbered by the Midianite army of 135,000 men. From all appearances, this seemed to be an impossible situation. God did not want Israel to boast that they had victory in their own strength. That honor would go to God alone!  “O my Lord, how can I save Israel? Indeed my clan is the weakest in Manasseh, and I am the least in my father’s house” (Judges 6:15). Yet God’s angel spoke to the contrary: “The Lord is with you, you mighty man of valor!” (Judges 6:12).

As Jeff spoke from his heart, I began to realize the magnitude of all that was happening here.   Jeff had been put through a fiery trial, but God spoke through Jeff when he stood beside his father in that hospital room. Just as God did with Gideon, God intervened in Jeff’s life, bestowing the gift of faith! God is still in the miracle business today. He still imparts the gift of faith to His children. Today we witnessed this at Believer’s Church. As the worship team closed in song, the gratitude overtook the congregation. The pastor’s wife, Dianne, encouraged them to continue playing. They just didn’t want this praise filled moment to end. Songs of thanksgiving rang through the sanctuary, permeating the hearts and minds of all who were present.

Sunday morning pre-service prayer is at 9 am and service begins at 10 am. Kids are important here too, with classes available every Sunday for newborns through age 5. Classes for ages 6 and up are available the 2nd and 4th Sundays and are invited to worship with their families on the 1st and 3rd Sundays where they are encouraged and given the freed to participate. They also have a continuous list of upcoming events that can be found on their website calendar or in their weekly bulletin. It was quite admirable that Pastor Wayne and Dianne make themselves available to others. Their direct e-mails are listed in the bulletin, and Pastor Wayne encourages all visitors to say hello to him after the service.   And what an honor it was for me to have the opportunity to meet him and say hello!

Pastor Wayne states, “While I will readily admit to you that I’m still laboring to learn to rest in God’s grace, I have recently experienced the life-giving dynamic of this great spiritual force”. Believers Church began in July of 1979 when Pastor Wayne and Diane Elston moved to this area. And now, nearly 40 years later, they continue to grow in God’s amazing grace. 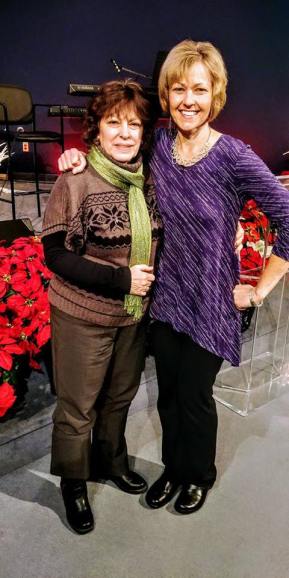