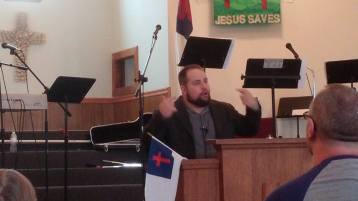 Most times when I visit a church on my journeys I deliberately look for certain clues to help me describe it such as mission maps, leadership identification placards, information tables, special ministry rooms such as classrooms, etc. However, in the absence of this kind of traditional evidence, I stop writing and look harder to see what I can find to identify a church’s persona.  Such is the case with Cornerstone Outreach Center.  The primary ministry of this church is their weekly Food Pantry Outreach.  The church is located in Washington County which has the 2nd lowest per capita income in New York State.  This small congregation of about 40-50 people truly show God’s love by feeding the large population of poor families in their community.

Having ministered through music in this church before, I was greeted with enthusiasm by Pastor Derik Bartholomew, Pastor Vern Collier, and several others.   The praise and worship was a mixture of mostly traditional songs accompanied by keys, guitar, flute and congas.   As I began to clear my busy mind and enter into worship, I discovered the most important ministry of Cornerstone. God was there! His presence came so quickly that it caught me off guard. This little country church has discovered its raison d’etre (its reason for being) – Practicing the presence of God by celebrating the person of God and manifesting His love.

Then they took up an offering while playing the old hymn “Softly and Tenderly” on the upright piano as Pastor Derik lead the singing. This was followed by testimony time with the members freely sharing from their seats about how God was working in their lives. They even allowed my friend Michael to share a lengthy testimony. I was impressed that they were open to having an “outsider” speak. As Michael spoke I heard several say, “thank You Jesus” and heard many “Amen’s”. When finished, Pastor Derik embraced him. It was nice to see a “stranger” so well received into this family of believers.

Pastor Derik began his message with an upbeat music video as he danced around the perimeter of the sanctuary, clapping his hands and singing out “REJOICE”! He poured his heart out as he spoke. He spent much time talking about how many were fed over the Thanksgiving holiday through their food pantry…a total of 143 families. This was met with enthusiastic applause. He then declared a goal of 200 families, and this was met by even more enthusiastic applause.

I always like hearing a church service conclude with a benediction. In this case, it was my favorite, Numbers 6:24-26 (KJV)…

This is a loving church. Pastor Bartholomew was saved at 10 years of age at the very altar he was now preaching from. Now that’s country! Now that’s what Church was intended to accomplish!

I left that day with a clearer understanding of how to do my job – “Look first for God’s kingdom and His righteousness and all the other things will be added to you.” (Matt.6:33)

I got my priorities straightened out at Cornerstone Outreach Center and so may you.